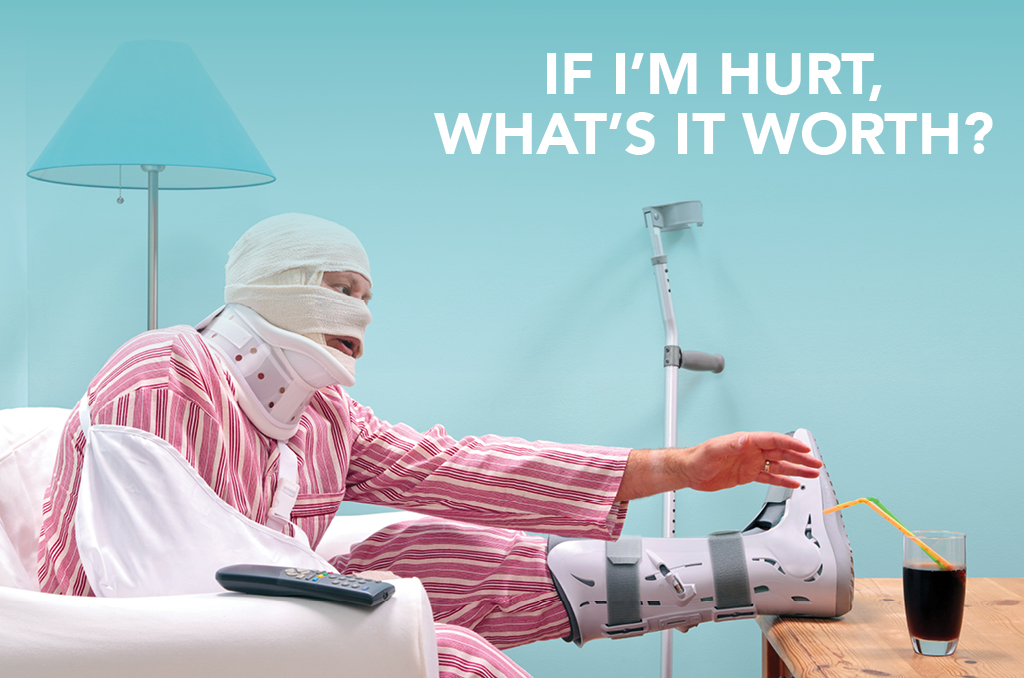 What am I Entitled to Recover if I’m in an Accident?

Obviously, no one ever plans to be in an accident or the victim of medical malpractice.  But it happens every single day.  We’ve all seen the TV commercials where smiling clients are shouting out huge dollar amounts, bragging about their settlement checks.  You might have wondered a time or two, if tragedy were to strike:  how much money would I get?  Unfortunately, these ads fail to explain exactly why that money was paid to them and what it bought.  We’re led to believe that being hurt in an accident by negligence is like finding a winning lottery ticket.  Not only is this misconception inaccurate, it doesn’t do justice for the services injury lawyers provide.  So, exactly how much would you be entitled to recover?  The answer is more complicated than the commercials would like us to believe.

Damages are Defined by Law

The truth is, insurance companies don’t freely and generously pay out large sums of money simply because an accident happened.  Rather, the law defines the items of damage recoverable depending on the circumstances.

Let’s say that you’re injured in Georgia because of someone’s neglect, carelessness, or abandonment (also referred to as negligence).  This means you can be compensated for the damage that was caused by that negligence.  The money that you’re entitled to recover is called compensatory damages, and it consists of both special damages and general damages.

What are Special Damages?

Special damages include your medical bills (even if your health insurance has paid them), as well as the wages you lost for time spent out of work.  They also include future lost wages and future medical expenses.  You can receive compensation for those losses if your doctor expects that you’ll need medical care in the future, such as surgery or pain management.

The victim might need a lifecare plan in more catastrophic cases.  A professional consultant would evaluate the costs of lifetime medical and vocational needs of the injured person.  An economist calculates the value of a lost future income and lost fringe benefits. A physician or other medical expert would testify that injuries are permanent or future medical care is reasonably necessary.  A jury determines if these special damages were caused by the negligence of the defendant.  A seasoned trial attorney can decide if (and to what extent) expert witnesses are necessary and helpful in maximizing your recovery.

General damages (known as pain and suffering) are also recoverable by law.  The harm caused by someone else’s negligence goes beyond just the cost of doctors’ bills and lost time from work.  Pain & suffering is more than the actual physical pain a person feels, both past and future, and mental anguish.  It also includes interference with normal, everyday living and enjoyment of life.  It takes into account a person’s inability to work and earn money, impairment of health and vigor, and fear of extent of injury, among others.  So how exactly is pain and suffering determined?  A jury evaluates pain and suffering based on the jury’s enlightened conscience after listening to all the evidence.  An experienced trial lawyer prepares your case with these items in mind.

In Georgia, the spouse, parent, or children of a person who dies may be entitled to recover damages when the death is caused by negligence.  This is known as wrongful death.  Damage for wrongful death is defined as the full value of the life of the decedent (the person who died) without deduction for expenses if the person had lived.  But how do we determine the full value of someone’s life?

Every Case is Different

As you can probably guess, every negligence case is unique and requires an individualized assessment of damages.  In some cases, the plaintiff’s damages could be reduced by his percentage of fault of other unnamed parties.  If the plaintiff is equally or more at fault than the defendant, he or she recovers nothing.  Sometimes, punitive damages can be awarded for the defendant’s recklessness or for aggravating circumstances like driving under the influence of alcohol or drugs. Such damages are meant to punish conduct and deter future bad behavior.

So, exactly how much would you be entitled to recover?  It all depends.  The answer lies in carefully analyzing the harms and losses you suffered, where you would have to file suit, your percentage of shared negligence, and more.

If you need a trial attorney to represent you, call David Dekle Law today for a free consultation.